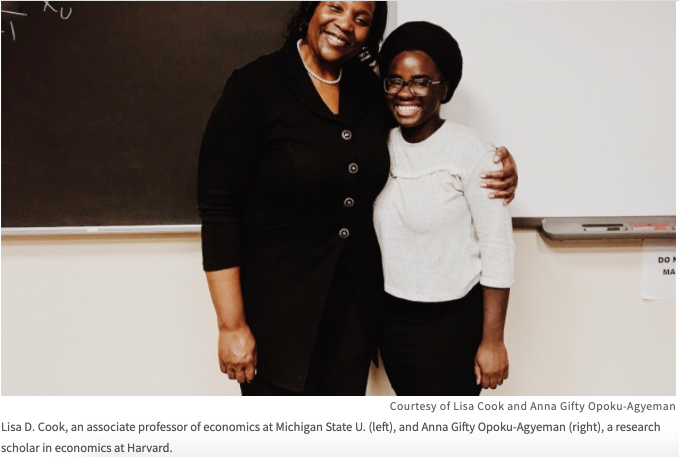 A few weeks ago, in the Chronicle: “‘It Was a Mistake for Me to Choose This Field’: A Survey Lays Bare the Experiences of Black Women in Economics”

A brief and heart-breaking excerpt:

According to the results of a climate survey that leaders of the American Economic Association called the first of its kind for the organization, which were released in September, 62 percent of black women reported experiencing racial or gender discrimination, or both. That was the highest percentage of any racial group. “I would not recommend my own (black) children to go into this field,” wrote one respondent. “It was a mistake for me to choose this field. Had I known that it would be so toxic, I would not have.”

Last week the Chronicle‘s teaching newsletter reported, again, about SETs: “‘Brilliant’ Philosophers and ‘Funny’ Psychology Instructors: What a Data-Visualization Tool Tells Us About How Students See Their Professors”.

Ask students to give feedback about their own experiences, not assign ratings, and use evaluations to locate patterns in a professor’s teaching over time, not to compare that professor to others.

The statement also provides examples of colleges that have taken a holistic approach to assessing teaching. The University of Oregon, for instance, has created a framework that includes peer review, self-reflection, and student feedback.

Pamela Newkirk, in “Why Diversity Initiatives Fail” in the Chronicle of Higher Ed today, writes about the ways that target-of-opportunity hiring fails, paying attention to history, and who’s responsible for the pipeline.

If anything, the trend is moving toward a flattened diversity-for-all mantle that embraces diversity of all kinds while ignoring the history and legacy of structural racial disadvantage baked into the educational system.

. . . Unless and until white America — including academics and those who claim progressive values — comes to terms with the reality of persisting injustice, diversity initiatives will continually fail.

“Institutions and funding agencies have an obligation to ensure that they are supporting the best possible science and minimizing any gender-specific barriers that may hinder the advancement of women in academia.

We believe that by ending sexual harassment and breaking the power of unconscious bias, they will make substantial progress toward this crucial goal.”

Come for the good food and iconic nametags. Stay for the good company and lively engagement with issues of mentorship, community, and equity.

As always, kids are welcome, and what an amazing chance for them to see, dare we say, a Maryland superhero: Senator Barbara Mikulski.

Senator Mikulski began her career as a social worker in Baltimore determined to make a difference her community. That determination led her to becoming the first Democratic woman elected to the Senate in her own right and the longest serving woman in the history of the United States Congress. A tenacious advocate, she’s stated that it’s not about how long you serve, but how well you serve. In 2015, she was awarded the Presidential Medal of Freedom by President Barack Obama.

After retiring from the Senate in 2017, Sen. Mikulski became a Homewood Professor of Public Policy at Johns Hopkins University, where she co-teaches undergraduate courses in Political Science, Sociology, and Public Health. She currently serves on the Boards of the National Democratic Institute and the Baltimore Community Foundation; she has been appointed to the federal Women’s Suffrage Centennial Commission and is serving as an honorary Co-chair for Baltimore City’s Census 2020 efforts. Senator Mikulski also participates in national speaking engagements related to leadership, innovation, advocacy, and women’s empowerment.